Of all the words used to describe doing business in 2020, smart leaders often use the word ‘pivot.’ From production lines, to customer service, sales and marketing, innovation and product development, label converters in 2020 know this word all too well.

Perhaps no one company epitomizes that word better than Michigan-based MacArthur Corporation, which enacted many changes as the Covid-19 pandemic forced the company to examine all the ways it does business.

Early in the pandemic, MacArthur Corporation got its hands on a CDC flu pandemic business planning checklist from 2005 that offered a solid framework for immediate steps to implement.

MacArthur Corporation president Thomas Barrett says: ‘I certainly can’t claim we were prepared for Covid-19, but I do feel good about the fact that we were able to leverage some of the things we put in place at the business ahead of time that allowed us to react quickly.

‘What we were not expecting and what we were unprepared for was the speed at which the pandemic developed – from something we were keeping an eye on to something we really had to react to quickly, almost in crisis mode.’

First, the leadership at MacArthur Corporation took advantage of a recently revamped IT infrastructure that allowed its office staff to work remotely without major disruption. But how to keep MacArthur’s essential employees safe from a highly contagious disease was another matter entirely.

Production floor
MacArthur Corporation was deemed an essential supplier through the pandemic, so it did not shut down. But this also meant it had to change how its employees interact with each other on the factory floor.

‘The biggest challenge was all these little interactions that we do every day at work – quality checks, going to pick up paper from the printer, for example,’ says Barrett. ‘All these small interactions where people are moving around the plant.

‘That was really the difficult thing to get used to from a social distance point of view. People are so used to working in close proximity to each other. These are all elements of human nature. We’re used to being in close when we’re working on something together, so educating our employees has been the biggest impact. Trying to keep people at their workstations for an entire day also creates some inefficiencies. Those are difficult habits to break. Fortunately, we have an amazing, adaptable and committed workforce that has worked hard to stay safe.’

MacArthur now reads temperatures of employees entering the building; it enforces mask wearing and 6ft (1.8m) social distancing rules; it has put physical barriers between workstations and limited the amount of movement during a shift to minimize interactions. The company has staggered breaks and encouraged them to be taken outside when possible. It has increased cleaning and installed touchless water faucets and paper towel dispensers. It also took big steps such as installing an antigermicidal ventilation system in its HVAC, and smaller gestures like propping open doors to avoid high-touch areas: ‘It’s a small thing, but it has a big impact,’ Barrett says.

Office pivot
The production floor wasn’t the only place where MacArthur Corporation had to pivot. CEO Christie Wong Barrett immediately noticed the changes with a sales team unable to travel to meetings or tradeshows and instead relying solely on virtual contact with customers.

‘Our conversations with customers pivoted,’ says Wong Barrett. ‘It used to be about what’s coming up in the future that we can work on with you today? Now our conversations are around safety, plant operations, where they are shutting down, what do they need help with immediately, are there any supply chain issues or launches that are behind?’

‘It’s really become a high-response, higher-frequency approach to customer service and sales. We’re helping customers with whatever problem comes at them at the moment.’

MacArthur Corporation has a fleet of 11 flexo presses and an inkjet press to produce pressure-sensitive labels, RFID labels and tags for the automotive, industrial, electronics and medical technology industries. Its specialty is performance specific-labels and it relies on an on-site testing lab for gauging performance of its products in harsh environments.

The company is a leading supplier to the automotive industry, which nearly came to a standstill in late March for two months. 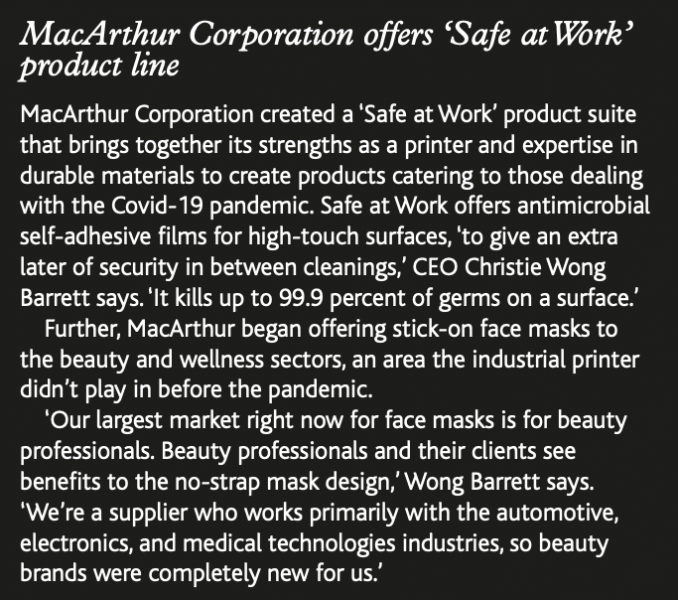 MacArthur Corporation had to be ready to respond when its automotive customers came back online. (The automotive industry has since rebounded to nearly pre-pandemic levels, Wong Barrett says.

Meanwhile, the medical technology industry, which MacArthur also serves, was surging in some verticals. Many of those customers were crucial in the early days of the pandemic, particularly those which manufacture complex medical equipment such as ventilators.

‘Medical device orders were 10 to 100 times what they would normally be in a non-pandemic environment,’ says Wong Barrett. ‘A lot of complex medical devices have thousands of part numbers produced in a scale of, say, 100 per month. Early on in the pandemic, these same customers needed tens of thousands of devices in three months. There was no supply ecosystem that could do this. It all had to be built immediately and with urgency, because every day you delayed getting a ventilator into the market was a day that 100 lives might be lost.’

MacArthur Corporation helped its customers scale 100,000 ventilators within a 90-day window. It was a project that truly brought together ingenuity, scale and speed, she says.

‘It’s amazing to be part of that as a critical infrastructure supplier of labels for these ventilators,’ Wong Barrett says. ‘We knew we needed to service medical technology and help fill that eco-system gap. We were in the right place and had the right team and right supply chain partners to get it together.’

‘There are a lot of different metrics used to measure business efficiency and what makes a good operating system,’ says Wong Barrett, who prior to becoming MacArthur’s CEO was a global consultant for advanced manufacturing industries at McKinsey & Company. ‘Looking ahead, this concept of flexibility and agility will undoubtedly be added to that list.

‘Being flexible is what helped us make it through the beginning of the pandemic and it’s allowing us to continue to stay sustainable throughout the pandemic. It allowed us to react to disruptions quickly so our customers didn’t feel any pain.’

History
MacArthur Corporation was founded in 1970 by Jack MacArthur after he retired from a 30-year career at General Motors. At this time the auto industry was increasing its use of labels for traceability, especially barcode labels which were a developing technology, and MacArthur grew with this trend.

In 1986, Tom Barrett Sr (Thomas Barrett’s father) joined MacArthur Corporation as a sales manager, and in 1991, he bought the company with his business partner Dennis Patrick.

The younger Barrett joined the company in 2005 after a successful career on Wall Street and with Fortune 500 technology companies. In 2007, Thomas bought Patrick’s share of the company.

Then came the financial crisis of 2008.

‘It was quite an amazing introduction to business ownership,’ Barrett says. ‘Being a first-time business owner in the beginning of 2008, then having the bottom drop out, and the whole economy in tatters eight months later. I often say after living through 2008 and 2009 I learned an incredible amount about business and leadership. But I don’t ever need to learn that much again. That was a once-in-a-career experience. And yet, here we are again. I’m hoping that I’ll be retired by the time the next “lesson” comes around.

Christie Wong Barrett joined MacArthur to lead corporate development in 2011 after careers in engineering, consulting and business unit leadership at Raytheon and McKinsey & Company. In 2012 she invested in the company and succeeded Tom Barrett Sr as CEO.