Another year of Covid . . . and booze bans

As the Covid-19 pandemic entered the global scene and firmly took root, last year’s headline for this traditional end-of year round-up was ‘A year like no other.’ Well, this year, of course, we’ve simply endured another 12 months of similar deprivations, which now seem to becoming entrenched as the ‘new normal’.

In South Africa, for instance, the population has endured no fewer than four periods of enforced abstinence, with total bans on liquor sales, ostensibly to free up hospital beds occupied by alcohol-induced trauma patients. But there’s also a widely-held belief that the pandemic has proved a godsend for the prohibitionist lobby among South Africa’s government ministers and cohorts, united in a common goal to impose more rigorous controls over the sale and distribution of liquor.

'Whichever way you look at it, manufacturing in South Africa - whether consumer goods or their packaging - isn't for the faint-hearted. But despite any number of cogent reasons for this statement, businesses do keep soldiering on'

When the latest (fourth) ban was announced, the alcohol industry was quick to fight back with one body approaching the high court for an urgent interdict against applying the ban in the Western Cape (home of the wine industry) and another requesting wine farms be allowed to sell their products online. In addition, industry associations have repeatedly requested the provision of scientific reasons for these successive alcohol bans.

But as with previous exhortations, it all fell on deaf ears.

At the time or writing, however, restrictions have been eased somewhat, although liquor sales are still verboten over the weekend.

While consumers view the bans as an incomprehensible, totally illogical imposition, they are a cause for real hardship among liquor manufacturers and their entire

The costs of this madness are immense. The first three prohibitions alone, which lasted a cumulative four months, cost the alcohol industry over R36 billion (USD 2.5 billion) according FTI Consulting's Economic Research Unit. And this is an industry that contributes R173 billion (USD 11.7 billion), or 3.4 percent, to the country’s GDP.
Another bone of contention is that booze bans have fueled the growth of the illicit alcohol market, which, says a recent Euromonitor International report, is valued at R20 billion (USD 1.4 billion) per year, and growing at an alarming rate.

According to the National Liquor Traders Council, the illicit alcohol trade has grown like an aggressive cancer under cover of the alcohol bans, forcing consumers to buy from previously unheard-of sources, while the legal industry was shut down by the government. Apart from business losses, the tax loss to the fiscus is also enormous. 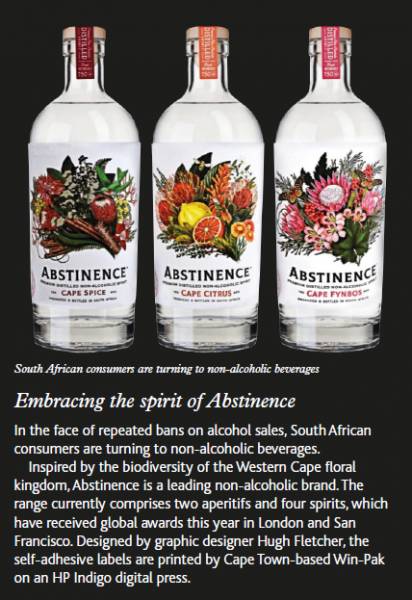 So far as packaging is concerned, the glass industry, which contributes over R11 billion annually to GDP, estimated a daily loss of R8 million to keep furnaces running during the alcohol embargoes (a necessary precaution to prevent irreparable furnace damage).

Before the latest ban, South Africa's largest glassmaker, Consol, which relies for much of its income on alcoholic beverage manufacturers, had announced that its R1.5 billion (USD 85 million) plans to build a new bottle plant (a plan shattered in August 2020) would be reconsidered, citing a return of demand for glass bottles back to pre-pandemic levels.

Now, however, the company is again considering shelving those plans.

The expansion of Consol’s glass production facility in Nigel (south east of Johannesburg), would have represented the construction of the country’s first furnace since 2010, and brought much-needed employment opportunities.

‘The project was halted owing to the impact of the previous alcohol bans. Now our investment decision will have to take cognizance of the extent of the latest alcohol ban and its impact on anticipated future demand,’ explained Mike Arnold, CEO of Consol Glass

The decision mirrored that of South African Breweries, one of Consol's biggest customers. The brewery cancelled R5 billion in investments in a year, citing the multiple alcohol bans related to the Covid-19 lockdown.

On the labeling front, Bruce Beswick, MD of Beswick Machinery (among other things, Bobst’s South African partner), comments on the effect of the alcohol ban on the country’s label printers: ‘Of course the impact was immense on our customers who supply the alcoholic beverage sector, but equally impactful are the shortages of raw materials as a result of Covid and problems with general global supply and shipping, which are still struggling to recover.’

However, it’s not all bad news; it appears that investment levels among label printers remain relatively unscathed. ‘We received orders for new machines even during the worst of Covid times, and are still enjoying a good level of bookings,’ Bruce Beswick remarks. ‘Our technicians continue to install and commission new equipment, and to service existing kit, so fortunately we’ve been relatively unaffected. Financially, in fact, our results are improved because we usually invest substantial amounts annually, training employees at OEM factories around the world, so this cost saving has been positive. Naturally, though, we would prefer to continue with our upskilling programs, to better support local label printers, but take whatever upside we can from this crisis,’ he adds.

Another plus for some label printers is increased demand for packaging and labels thanks to more home consumption of food and beverages. 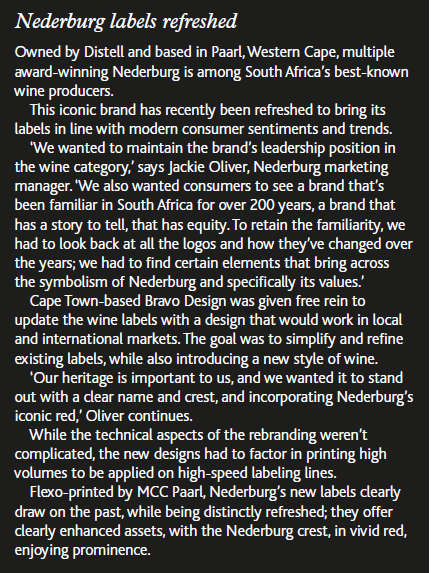 Whichever way you look at it, manufacturing in South Africa – whether consumer goods or their packaging – isn’t for the faint-hearted.

But despite any number of cogent reasons for this statement – including draconian labor laws; a business-unfriendly tax regime; a government hostile to private enterprise; ridiculously regulated prices (e.g. power); rampant inflation; and an ever-weakening local currency – businesses do keep soldiering on.

As remarked recently by Simon Downes, owner and executive chairman of Shave & Gibson, a 40-year-old Durban-based folding carton manufacturer: ‘The last 18 months of the Covid-19 crisis have changed the way we approach every aspect of life; and in this unprecedented environment we’ve become more introspective. We’ve had to decide what to make of the opportunity to change the surrounding dynamic. As Winston Churchill famously declared during the bleakest days of World War Two, “Never let a good crisis go to waste!” We’ve certainly elected to follow that edict, and intend to emerge stronger and leaner than we were before this dreadful pandemic.’

Gill Loubser is Labels & Labeling's Africa correspondent, providing coverage of this important market for the label and package printing industry.

>By geographic region
>By author