In many ways, this edition of Labels & Labeling represents a turning point in the digital debate. Gallus, one of the founders and titans of the conventional narrow web industry, has publicly announced a new mission: to lead the ‘digital transformation’ of the labels industry with the launch of a standalone digital press with no inline converting units.

Gallus already has a hybrid digital press, of course, the LabelFire, but this is positioned as the company’s ‘Rolls Royce’ at the top end of the market, along with all the inline options one would expect from a top-of-the-line flexo press.

The revelation about Gallus’ new digital press, the Gallus One, is that it targets the mid-market sector. It is a standalone press without any inline options, with finishing envisaged as near line on a separate converting machine.

Up to now, the conventional press manufacturers have targeted primarily the higher-end market with their hybrid inkjet-flexo presses. But the new Gallus press is aimed specifically at the smaller converter looking to replace legacy flexo or letterpress machines. It also has enough advanced features inherited from the LabelFire, such as automatic missing nozzle compensation, to attract elite converters looking to populate multiple sites with digital presses.

In another major cultural shakeup, Gallus stresses that the hardware specifications are less important than placing the digital press inside an ecosystem that links it to wider factory management systems. It is no longer about training skilled operators but automating and de-skilling the actual print process. The skills move to the front end of the process, but even here, much can be automated. Here, Gallus plugs into partner Heidelberg’s existing Prinect workflow.

A similar story can be told about Mark Andy’s announcement that it will integrate Konica Minolta’s latest Accurio digital print engine in a new generation of Digital Pro presses. 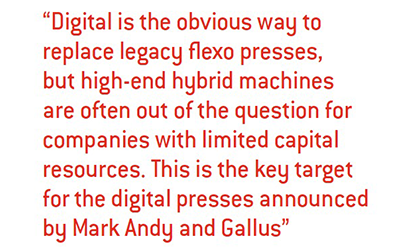 While Mark Andy has the high end covered with its Digital Series HD hybrid press, the company was probably the first of the conventional press manufacturers to recognize that a new machine concept was required to tackle the smaller-to-mid sector of the converter market. This led to the development and launch of the Digital One press, which was built around a 4-color toner-based print engine and basic onboard converting.

This can be seen as a continuation of Mark Andy’s historical targeting of this market segment with flexo presses like the 830, 2200 and Scout. The company sees simple to operate 4-color toner presses as the direct successors to these machines.

The prize for targeting this part of the converter market is the legacy press base. Depending on which analysis you use, legacy flexo and letterpress machines make up between 40 to 50 percent of the installed narrow web press base across Europe and North America. These machines are generally kept going because they have long been paid for and keep turning over a modest profit with little effort. However, they generally require skilled operators to set up and change over since there is little or no automation. And as we know, such operators are getting more and more scarce. The pandemic also demonstrated the need to de-skill the print process to avoid having key personnel out of action and bringing press lines to a halt.

Digital is the obvious way to replace these presses, but high-end hybrid machines are often out of the question for companies with limited capital resources. This is the key target for the digital presses announced by Mark Andy and Gallus.

Before leaving the subject, it is worth noting that Omet has proved the exception to this trend with the launch of its mid-market KFlex flexo press platform. Interviewed by this writer, Omet CEO Antonio Bartesaghi said Omet believes label converters prefer flexo to digital - provided flexographic technology continues to progress towards ‘set and forget,’ where machines can be operated by semi-skilled labor assisted by basic automation and machine intelligence. Omet has developed a new way of manufacturing the KFlex platform more efficiently, making it extremely cost competitive in its target market.

It should also be noted that neither Gallus nor Mark Andy has abandoned flexo press development. It is a question of which features and at which price-point flexo works against digital in the small-to-mid sector of the converter market.