Intaglio printing (which has become known as gravure printing) is a specialist print finish which is predominantly used for security applications.

Intaglio printing is the opposite of relief printing in which the image to be printed is etched or engraved below the surface of a print cylinder or plate. The printing process is carried out under pressure. The ink is consequently drawn up from the recesses onto the substrate and dries leaving a slightly raised image, which can be detected by feel.

Intaglio printing originated with the goldsmith engravers in about 1446. The images were hand engraved onto copper, gold and silver and the recessed image was filled with a black ink or enamel known as Niello and then pressed onto paper. These early prints were used by the goldsmiths to display the range of engravings available to the customer. The goldsmiths not only engraved their products, but also developed an etching method using nitric acid. In about 1640 a German engraver called Von Seigen employed a new method of intaglio printing called mezzotint, which was used to reproduce paintings in black and white and also in color. Engravers mastered the art of varying the depth of the engraving or etching which allowed differing shades of color to be achieved.

The intaglio process was further developed in the early seventeenth century when it became known as gravure printing. The process began to use metal plates which carried the etched image, which was then printed onto the substrate.

The invention of photography led to the method of transferring a photo image onto a carbon tissue coated in a light-sensitive gelatin. This process allowed the etching of an image onto a steel or copper covered rotary cylinder and heralded the beginning of the modern rotogravure process.

The process of intaglio engraving and printing is relatively simple. The image to be reproduced is engraved onto a metal surface usually of copper, brass, zinc or steel. The image is hand engraved or etched and the lines/cuts hold the ink which is to be transferred onto the substrate.

The hand engraving of an intaglio image requires considerable craft skills. The engraver uses an engraving tool called a ‘burin’ which is a steel square ended tool which is diagonally shaped and sharpened at one end. This is used to cut a series of lines which can vary in both width and depth of the cut. 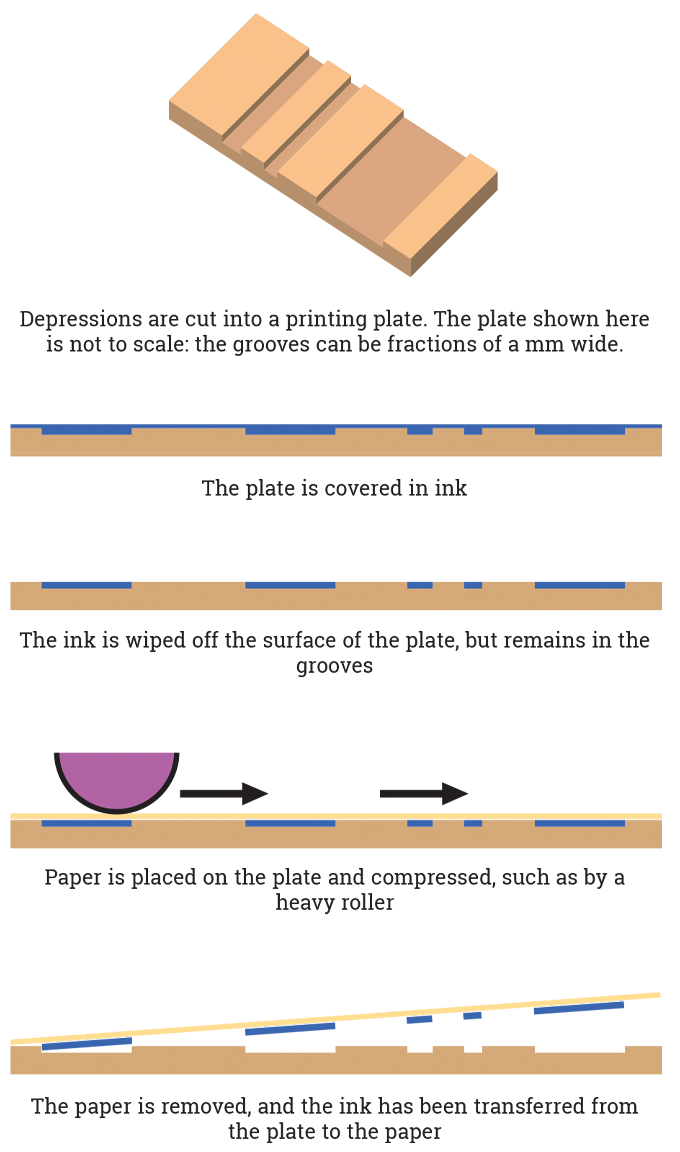 The other method of intaglio imaging is by the etching of the image onto the plate. The plate is covered in a film of acid-resisting wax called the ‘ground’.

The engraver uses an etching needle.

The plate is then placed into an acid bath allowing the acid to etch into the surface of the plate where the ground has been removed thereby creating the recessed intaglio image. This is called the ‘biting’ process.

This etching process can be repeated by identifying the areas of the image that may require a deeper line depth.

This involves applying a lacquer/varnish to these areas and re-etching with acid. This allows the engraver to vary the depth of the image to create the different tones of the image.

When the etched image has reached the required depth the plate is removed from the acid bath and the ground is wiped from the plate surface, which is now ready for printing.

The use of the intaglio process in modern print relates very much to security printing, particularly in the printing of paper and synthetic substrates for currency, passports, banknotes and self adhesive postage stamps.

The processes used for the production of these complex products, often involves multi-process combination presses, equipped with lithography, flexography, screen and gravure/intaglio printing and a variety of finishing processes.