Massimo Raffaele took a bold leap when he founded ACM Plastics without any experience in the packaging market. Within a short time, he had achieved a high level of success and earned the respect of his customers, suppliers and competitors alike with a pioneering vision that quickly positioned his business at the top of a demanding industry.

Raffaele took his first steps in printing as a truck driver transporting and delivering packaging materials to clients throughout the Milan area. During this time, he saw an opportunity to fill a gap in the market for customers seeking high-quality flexible packaging in smaller quantities and with faster delivery times than typically offered by existing industry suppliers. 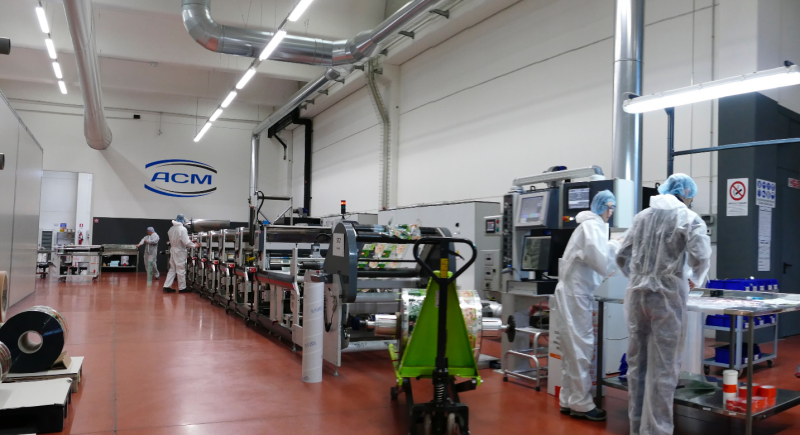 As a former racing car driver, Raffaele was certainly used to making bold moves, and over the next few years developed ideas for a pioneering concept – to become one of Europe’s first flexible film converters to offer all-UV LED curing in a narrow to mid-web format. Furthermore, he planned for the company to specialize in the food and pharma markets, where many brand owners had been reluctant up to that point to commission UV cured flexible packaging due to concerns over potential ink migration.

The two partners’ ingenuity, persistence and close collaboration with cutting-edge suppliers not only made the concept a reality, but also helped to establish UV LED printing as a growing production standard in flexible packaging and labels.

In 2008, Raffaele and La Franceschina invested in their first press, a 7-color Omet VariFlex 530 with conventional (mercury) UV curing, and became one of the first flexible packaging printers in Europe to investigate the potential of extended gamut printing.

This technology, which ACM calls Heptachrome, significantly extends the available color gamut by adding three more colors – orange, green and violet – to the standard CMYK palette, allowing Pantone color shades to be matched without the use of dedicated print stations. Avoiding the need to change inks from job to job greatly speeds the job makeready process – a ‘pit-stop’ approach that certainly appealed to Raffaele’s racing driver instincts.

Inside lane to UV LED

By 2014 Raffaele and La Franceschina were seeking ways to eliminate some of the speed bottlenecks with traditional UV printing. This included excessive heat build-up from the mercury UV lamps, which required the press to run slower and the printed rolls to cool down in a storage locker before lamination.

Flint Group was chosen as the ink supplier partner, using the company’s EkoCure Ancora Dual Cure inks which are can be used with both UV LED and mercury UV curing systems to the same exacting standards – which simplifies the process in the press room when transitioning between mercury and LED lamps. The Ancora inks were supplied in a low migration formulation ideal for applications in food and pharmaceutical labels and flexible packaging. The inks are available in flexo shades, metallics and coatings as well as gloss and matte varnishes.

‘The first thing that customers noticed is that each color “shined” more than before,’ Raffaele recalls. ‘This can be translated into more visibility for each final package.’ ACM is printing at 70/80 lines per cm and seeing increased color saturation with smooth gradient transitions to zero.

Following months of collaboration and refinement, ACM staked its claim as one of the first printers to install an LED printing system in the narrow web flexo market. Along with AMS Spectral, Omet and Flint, the company had proved that UV LED could dramatically improve the printing process and make narrow web food-grade cured packaging a reality. ‘With UV LED, we can ensure rapid and uniform drying, so we are able to reduce each production cycle timing and more quickly satisfy all customers’ requests,’ says Raffaele.

La Franceschina adds that along with the benefits noted above, the LED lamps have a constant yield throughout the duration of the curing process. ‘This guarantees homogeneity of performance over the entire range of the printable material, improving ink anchoring and eliminating delamination problems.’ 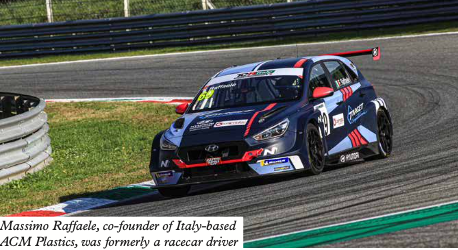 The switch to UV LED speeded up drying times on film, making the entire printing process more efficient and flexible while guaranteeing rub and fade resistance and what Raffaele describes as ‘enduring brightness’.

UV LED curing eliminated the primer step and any heat to the press, so ACM was able to print on a wider variety of substrates at faster speeds without worrying about film shrinkage or wait times.

‘What we are calling HD LED printing is now ACM Plastics’ standard,’ says La Franceschina. ‘We guarantee realistic images and a high degree of detail and color stability in the whole printing run.’

Delivery times dropped from four days to next day, since mercury UV curing had required 48 hours for the printed substrate rolls to cool before the lamination process. ACM can also efficiently manage runs as small as 50kg, ensuring just-in-time supply and eliminating the need for its customers to warehouse stock.

In addition to its speed and quality differentiation, switching to UV LED printing has ushered in significant environmental benefits which amplified the company’s sustainability message.

UV LED curing has reduced ACM’s energy costs and, in lock step, its carbon footprint by an average of 50 percent versus using mercury lamps on all its presses. AMS Spectral’s liquid-cooled LED technology has also eliminated mercury and ozone in the press room, along with blower noise, preventing risks to workers’ health. Additionally, it increases production up-time as lamps, which have a longer lifespan, require no warming or cooling before and after operation.

Along with 100 percent recyclable packaging and fully recyclable PET films, ACM offers a more sustainable flexible package thanks to the use of solventless adhesives.

There are other sustainability benefits. Because minimal heat is transferred to the web, the use of UV LED allows the production of thinner high-barrier films, which can facilitate the move to lighter, easier-to-handle packaging, drastically reducing overall waste and emission levels. ACM also provides its customers complete traceability, from raw materials to the end product.

Raffaele and La Franceschina check in regularly with ACM’s machine operators to gauge the ongoing success of their investments, since they are on the front lines. They say they have received nothing but praise for the ‘reliability and precision’ of the combination of AMS Spectral UV’s UV LED technology and Flint Group inks on its Omet presses.

In 2017, ACM bought a second all-LED press, an 8-color Omet Variflex 860, to fulfill booming demand for ‘food-safe’ packaging and in 2018 it added a Bobst M6 670 with LED that extended its range to nine colors.

Today ACM has transitioned completely to UV LED printing, with no remaining traditional UV lamps, and leads the world among AMS Spectral UV’s packaging customers for the number of LED lamp units in operation in a single facility, with 27 in production and 17 more set for installation.

‘We know that to be noticed, and be chosen, is one of the most important challenges facing small and big brands,’ says La Franceschina. ‘We respond to packaging requirements with tailor-made solutions, identifying the right laminations to better preserve the product.’

ACM’s packaging options range from film, stand-up and stick packaging for coffee, tea and solubles, to bar wrap and pillow bag for confectionery and chocolate, and side-seal and gusseted pouches for snacks. Its pharmaceutical packaging materials meet stringent legal requirements and can include anti-tampering features.

For cosmetics brand customers ACM is able to provide vivid, bright colors including gold and silver and special features like windows. Its packs are resistant to water, alcohol and other aggressive agents while preserving the cosmetics inside.

In 2020, the San Marino, Italy-based SIT Group acquired a 70 percent stake in ACM, providing a significant investment boost. Raffaele and La Franceschina continue to lead the team and serve their growing customer base, which currently encompasses 500 brands.

Recently ACM signaled the next phase of growth by investing in more UV LED printing capacity from Omet and AMS Spectral UV, comprising two new machines, an 8-color and a 9-color Omet VariFlex 670 scheduled for installation this year.

‘We are ready to face the challenge of the transition from rigid to flexible packaging,’ concludes La Franceschina. ‘Bright colors, eco-sustainable solutions, smaller portions, guaranteed dosage, waste reduction. There is only one packaging method to respond to each of these needs: the flexible one.’