According to the latest Finat research, after a relatively modest start of 2021, labelstock demand in Europe boomed in the second quarter.

Compared to the same quarter of 2020, consumption of self-adhesive label materials in Europe was 9.3 percent higher. This is a remarkable result considering that label demand already peaked in Q2 2020 with an annual growth rate of 8 percent due to the Covid-19 outbreak. The demand peak in the spring of 2021 correlated with the general economic recovery in Europe, as demonstrated by the 13.2 percent growth of the EU economy compared to Q2 in 2020.

Contrary to 2020, labelstock demand growth was led by volume paper roll demand which increased by a record 14.6 percent year-on-year, as opposed to a 4.2 percent decline in demand for filmic roll label materials, compared to the peak in Q2 2020 (when non-paper rolls registered a record increase of 22.4 percent). The rise in paper roll demand already announced itself in the first quarter, when reports came in about paper shortages in the supply chain after a period of destocking. 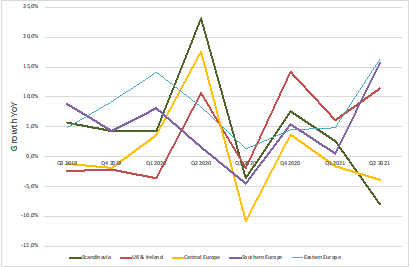 According to Finat, regionally, demand growth in the first half of 2021 was led by strong, double-digit year-on-year growth rates recorded in the UK and Ireland, Southern Europe, and Eastern Europe. It is worth noting that a year ago, all three regions underperformed compared to Northern and Central Europe, which peaked with above 15 percent growth rates in Q2 2020 and recorded substantial declines compared to this excessive period one year later.