There are a wide range of ink and coating solutions to help secure products against counterfeit attacks, alteration, and to authenticate branded products on the shelf, in the warehouse, or in a forensic laboratory. Such systems may be for covert (concealed) authentication or overt (primary) validation.

OVERT OR PRIMARY VALIDATION
Overt or primary validation inks (see Figure 10.1) are designed to supply an initial indication of provenance that may be obtained visually within a few seconds. 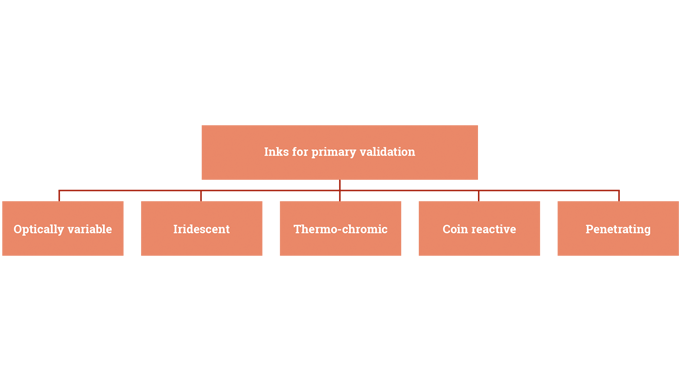 Perhaps the most basic security ink system is using a matte or a gloss varnish, which stops photocopier attacks. Adding a color-shifting pigment to the varnish increases the security level.

Change color when tilted under light. The high pigmentation levels in these inks requires a print process which can carry heavy ink weights, typically silk screen. Iridescent inks form part of this class of products, giving a relatively low level of protection.

Inks change color permanently under the influence of temperature and are typically used in a supply chain to detect if a product has gone out of a specified temperature range. Tri-thermochromatic inks can undergo a range of color changes which can be tuned to a specific temperature profile. They are particularly useful when a permanent recorded of (adverse) temperature conditions is required.

One of the most basic forms of product protection. Formed from a semi-gloss varnish. When rubbed with the edge of a coin, oxidation elements turn the varnish gray.

Designed to infiltrate paper substrates. They bleed through and, when viewed from the reverse, show a security message. Because the ink is actually absorbed into the paper itself, it's a very secure method of product security.

COVERT INKS
Covert security inks require some kind of instrument or device, like a smart phone or a UV or laser light source, to provide authentication and assurance that a security feature is present. The most commonly used covert security inks are shown in Figure 10.2. 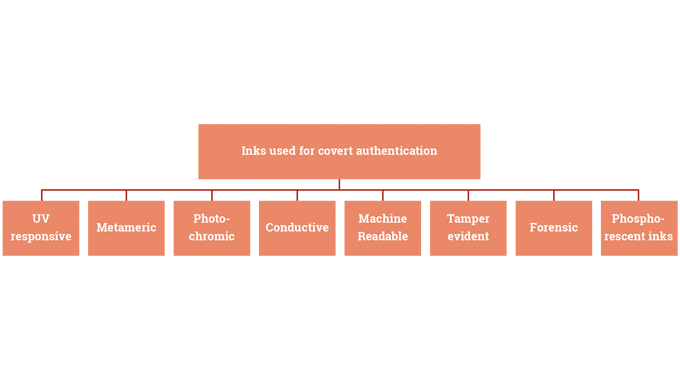 Often known as ‘black light’ inks, they are authenticated with a UV power cell and can be tuned to a specific wavelength for further security.

Luminescent inks which continue to glow after the UV light source has been removed. The decay can be precisely measured and used as a further security element.

Change color when viewed under different light sources, allowing a different image to be observed.

Display a color change when exposed to light. The principal drawback of these inks is that daylight can cause loss of color fastness over time.

Allow a label or pack to interface with a smart phone when held against the screen. The user is then taken directly to a secure website, where authentication takes place.

This class of inks use scanners to detect specific chemical signatures. Typically, these will be formulated from rare earth materials and embedded within the ink or the varnish. Doped crystals are used to emit visible colors which are picked up by a near infra-red light reader. These readers can be handheld or placed on a conveyor belt for industrial-scale applications.

These inks form a covert security system which does not require an authentication device. They are used to protect against attacks which seek to modify or erase codes such as best before dates. A screen of erasable ink is placed underneath the code, often enhanced by a chemically sensitive ink to warn against attack by bleach or other aggressive chemicals.

Forensic inks provide the highest level of security, containing microscopic particles which need to be validated offline by laboratory testing. Because organic markers like synthetic DNA are dissolvable, they can be applied by inkjet printing. Inorganic markers are best carried in viscose inks or varnishes.

Further information on security inks and coating can be found in the series on Brand Protection, Security Labeling and Packaging.